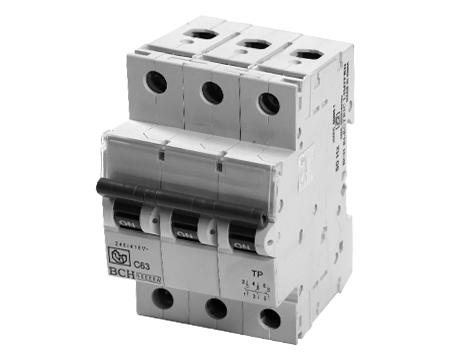 Miniature Circuit Board (MCB) is essentially a safety device that has significant commercial and residential applications. It is an electro-mechanically driven automatic circuit protection device. It’s an automatic safety mechanism that prevents damage to electrical circuits due to excess current flow. It is typically used for low voltage electrical networks like lighting and small electrical appliances.
It operates automatically, meaning if a short circuit or overcurrent occurs, the MCB will automatically trip, disrupting the power supply and preventing any damage. These are sensitive to minimal current variations and detect even minute current levels that exceed safety limits. MCB uses to interrupt a circuit during overload & short circuits. It can be used as a substitute for fuses for domestic applications. The benefit of MCB over fuses is that they are reusable even after interruption of the circuit after an overload or short circuit.

So, where does MCB find its uses?

These Miniature Circuit Boards are the most reliable solutions to ensure the safety of electrical equipment used in residential and many industries, including manufacturing, healthcare equipment, automotive electronics, consumer products, and agriculture. The primary reason for their effectiveness is their ability to perform in extreme operating environments and withstand higher temperatures, vibrations, humidity, and many other factors.

BCH has been instrumental in devising reliable Miniature Circuit Breakers that meet every safety standard. Our high-performing MCB conforms to all industry standards for effectual output and multiple commercial applications. MCB are favored more due to the ease of use and relatively simple mechanism that makes MCB the most reliable and safe alternative to traditional fuses. BCH ensures that all industrial and safety standards are followed while manufacturing these MCB. Some of the essential benefits of BCH MCB are:

BCH Electric Limited is committed to delivering products that meet the higher industry standards in terms of safety, dependability, and performance, along with the assurance of higher service life and convenience of application. We promise the guarantee of secured electrical systems in all industries and households with our trusted MCB.

Welcome to BCH forum and FAQ area. Here you can ask questions and clear doubts.

Ask our experts which BCH product will best fit your needs and other queries.

Get product and after sales support. Download brochures and catalogs.