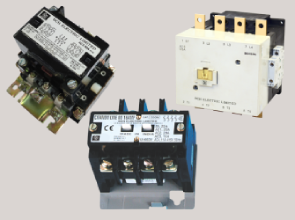 A contactor is a device for creating and breaking an electrical power circuit. For example, we normally use a contactor for turning on & off an electrical motor. Unlike relays, contactor are prepared with qualities to control and suppress the arc made when interrupting heavy motor currents. Contactors come in many states with various capacities and characteristics. Unlike a circuit breaker, a contactor is not planned to interrupt a short circuit current. The contactor is mainly used in higher current carrying capacity applications, while the relays are used for lower current applications.

Lighting Control
Contactors use to deliver central control of large lighting installations, such as office buildings or retail buildings. Latching contactor uses to decrease power consumption in the contactor coils and have two operating coils. One coil, momentarily energized, seals the power circuit contacts, which are then mechanically held closed; the second coil opens the contacts.

Electric Motor Starter
Contactor used as magnetic starters. A magnetic starter is a device created to provide power to electric motors. It contains a contactor as an essential component, giving power-cutoff, under-voltage, and overload protection.
The use of a contactor with the circuit breaker secures the safety of load operation in industries. In such an application, it is used to switch a load fast.

Knife Blade Switch
Knife blade switch contactors are often used to control electric motors. They consisted of a metal strip design to drop into contact when operational. The switch is equipped with a lever for pulling it up or pushing it down.

Manual Controller
Among the new features added in the Manual contactor, apart from the safety quality, the next most important feature of this new structure is the addition of the double break contacts. These new contactors are designed to open the circuit in two places simultaneously. So even in a smaller space, it helps you work with more current. As the name implies, the double break contacts split connections such that it forms two sets of contacts. In addition, the button or switch of the manual controller is connected to the controller, so it cannot operate remotely.

Difference Between Contactors and Overload relays:

(A) BCH Freedom series of contactor:

The motor is the most widely used electrical equipment to convert electrical energy into mechanical energy. In a day-to-day operation, a Contactor accomplishes the desired switching on/ off of these motors. A contactor is a switching device, capable of making, carrying, and breaking currents under normal circuit conditions and also under overload conditions. Based on the working principle, there are many types of contactor are available but the most commonly used one is the electromagnet type contactor for its simple operating principle and rugged construction. A contactor is an electromechanical switch, which is closed & held magnetically. In a contactor, the force required to close its main contacts is provided by an electromagnet. Contactors are multiple-pole air break switches capable of repetitive operations with a mechanical life expectancy as high as 10 million operations.
The basic operating principle is converting electrical energy into mechanical energy in the presence of a magnetic field. When the supply is extended to the coil, it becomes energized and acts as an electromagnet, which attracts the moving core towards the fixed core. During starting, the coil draws more current compared to the holding period since the moving core has to overcome the initial inertia. The ratio of starting and holding currents is approximately 10. When the moving contact just touches the fixed contact, it experiences a bounce. This bounce is detrimental to the life of contacts, as every bounce will generate an arc and eat the contact material. Bounce is minimized by reducing the speed of armature movements and improving the material property of contacts. While in just the touch position of main contacts, the moving core of the electromagnet is still not in contact with the fixed core. This gap is desirable as the further travel of the core will generate extra contact pressure on the contacts. This extra travel of the core is called “over travel”.

A contactor consists of the following 3 systems mainly.

BCH offers a large range of power contactors for a variety of applications in different industrial segments like Steel, Cement, Power, Railways, Utility, Automobile, Cranes, Crushing, Plastic, Printing, Food & Pharma, etc. BCH Freedom range of contactors is a one-stop solution for all industrial needs. The range begins from 6A to 1200A AC3 duty in 3 Pole & 4 pole versions. The prominent salient features of Freedom range contactors are as follows:

A Capacitor can function as a short-circuit element during switch-on. The magnitude of capacitor inrush or charging current depends upon AC voltage at the time of switch-on, the impedance of the feeder cables, and supply transformers. when switching individual capacitor banks, the charging current can reach a peak value of up to 30 times the rated capacitor current and in the case of multistage capacitors it can reach up to 180 times the rated capacitor current (for 1 to 2 ms). Conventional power contactor will simply allow the inrush current to flow through, as a result, both contactors and capacitors will be heavily stressed. Such a high inrush current is undesirable. Therefore to limit this peak current within contactor making capacity, capacitor duty contactors are fitted with a block of three early make aux. contacts in series with 6 damping resistors (two per phase).
After successful dampening of inrush current, the main contacts close & the aux contacts gets automatically disconnected from the circuit thru a de-latching mechanism.
If a conventional power contactor is used for a capacitor switching application, the size of the contactor will be more which will in turn increase the system cost. On the other hand, the size of a special capacitor duty contactor will be less and so the total system cost for the same application. Hence, capacitor duty contactors are best suited for capacitor switching applications which not only save cost but also improve the life of the equipment.
BCH offers a wide range of Freedom series Capacitor duty contactors from 5kVAR to 60kVAR for efficient control of single or multiple capacitor banks. 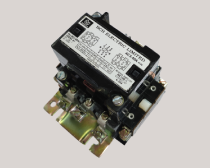 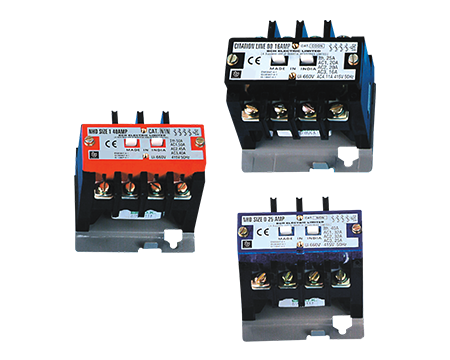 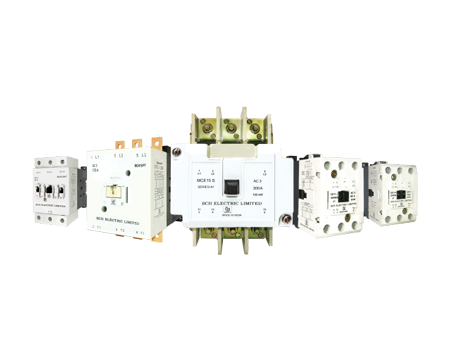 Welcome to BCH forum and FAQ area. Here you can ask questions and clear doubts.

Ask our experts which BCH product will best fit your needs and other queries.

Get product and after sales support. Download brochures and catalogs.